Dedicare is an authorized staffing company with main activities in the staffing of doctors, nurses and social workers. The Group is active in Sweden, Norway, Finland and Denmark. As of December 31, 2018, the business had recalculated the number of full-time employees, 580 doctors, nurses and social workers, as well as 78 employees in the administration and sales organization. Both in Sweden and in Norway, Dedicare is among the largest companies for the staffing of nurses, doctors and social workers. Among the customers include: the 20 Swedish regions, 4 health regions in Norway, more than 150 municipalities in Sweden and Norway and private companies.

Staffing is often used by health care providers to cover up staff shortages or to gain access to specialist expertise. There are many occasions when healthcare providers choose to use Dedicare’s staffing services and include, for example:

Staffing is an effective way of managing an underlying difficult resource situation in a simple and flexible way. Doctors, nurses and social workers can relieve high workloads and provide skills that are not normally found in the workplace, especially in sparsely populated areas.

The benefits of staffing for our consultants include the opportunity to control where, when and how much you want to work. The possibility of changing workplaces and / or work tasks also increases by being included in a staffing database. Within staffing, Dedicare staffes doctors, nurses, social workers, medical secretaries and other staff in health care and social work.

The staffing services offered by Dedicare means that a nurse, a social worker or a doctor works temporarily with Dedicare’s clients. Our consultants work in some cases only temporarily, but they can also take on assignments alongside a permanent position with another employer. The assignments may include single days or longer periods and may apply to individual doctors as well as staffing of entire departments, units or operating teams.

For customers in Norway who need educators in school and preschool, Dedicare uses the Acapedia brand. 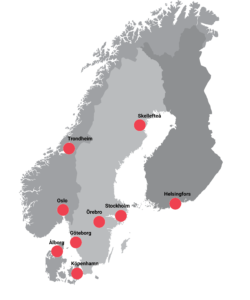 Dedicare has four offices in Sweden (Stockholm, Gothenburg, Örebro and Skellefteå), two offices in Norway (Trondheim and Oslo), one office in Finland (Helsinki) and two offices in Denmark (Copenhagen and Aalborg).

In 2019, Sweden accounted for 58 percent (68) of revenue. Dedicare’s head office is located in Stockholm, but operations are conducted all over Sweden. In terms of turnover, Stockholm, Västra Götaland and Örebro are the most important regions. Dedicare currently has all 20 Swedish regions and around 150 municipalities as customers. Dedicare also has agreements with the largest private healthcare companies such as Capio, Aleris and Praktikertjänst.

In 2019, Norway accounted for 41 percent (32) of revenue. Staffing and recruitment of nurses, doctors and educators as well as customer processing are conducted from the offices in Oslo and Trondheim. Staffing takes place all over Norway. Dedicare currently has all Health Regions and many municipalities as customers. In terms of sales, the market is the largest in the Oslo region. The entire West Country and Northern Norway are also major markets. Dedicare has nurses who work largely throughout Norway.